Introducing the BUZZ from EMAX. The BUZZ is a 5" size RTF (Ready-To-Fly) quadcopter that comes fully built with everything you need to have an amazing flight experience! Just add a battery and a FrSky compatible radio and you are ready to take to the skies.

1204 5000KV motor is one of the best motors for 2-3inch FPV Racing Drone, which has increased power efficiency, adopting multi-heat dissipation hol...

iFlight continues their tradition of producing excellent motors in a variety of sizes and Kv to meet the needs of different build types and flight ...

XING-E series are everything you love about Xing motors at a more affordable price. Performance and durability are still of utmost importance to iF...

BrotherHobby's 2510 Avenger is the motor used in the official DRL Racer 4 builds. (They run a custom 1250Kv) It's truly a premium quality motor all...

BrotherHobbys Ultralight motors that pack loads of power. These motors were designed for sub-250g 5" racing drones. Available in 1950Kv and 3150Kv ...

These are the basically the Avenger 2806.5 on beast mode. Big beautiful bells, and power for days! Check out our vast motor selection and all our B...

View full details
Powered by
3.3 3.3 star rating 4 Reviews
Write A Review
Thank you for posting a review!
We value your input. Share your review so everyone else can enjoy it too.
share
share
share
Thank you for posting a review!
Your review was sent successfully and is now waiting for our staff to publish it.
Clear All
Filter Reviews
Clear All
Frame Receiver Quad Firmware
Frame Receiver Quad ...
Firmware
More Filters
FILTERS Clear All
Rating
Reviews
Show 4 Reviews
Rating
Images & Videos
4 Reviews
Updating Results
Verified Reviewer
What is a Verified Reviewer
A Verified Reviewer is a shopper who has confirmed an email address, or connected a social network with Yotpo, providing an added level of transparency and trust.
0 star rating
02/08/20
On
share ' Share Review by Anonymous User facebook facebook Share Review by Anonymous User twitter twitter Share Review by Anonymous User LinkedIn linkedin Share Review by Anonymous User
Was this review helpful? 0 0
02/08/20
I
Ian F.
Verified Buyer
What is a Verified Buyer
A Verified Buyer is a user who has purchased the reviewed product through our store.
3 star rating
11/29/19
Nice platform for Byte Frost but mine literally flipped out and died
It's a nice little compact freestyle frame good for 4-5S, that'll easily fit a 3 layer stack, so it'll carry the Fatshark Byte Frost VTX fairly easily and the nose sticks out far enough that the props are mostly out of frame of the camera. It's a little heavy for its size, but seems pretty solid, although I haven't crash tested it yet.

Mine flew great for 1-2 dozen flights with no crashes, and then on one relatively soft landing on a hard surface, the instant after it touched the ground, it completely spazzed out, did something like 5 flips in about a second, less than 2 feet from the ground, finally shut off and dropped with no physical damage. Flight controller was *dead* after that. No lights on the FC with battery or USB. No connection to computer.

Interestingly RDQ nor any other 3rd party stocks the EMAX F4 Magnum II flight controllers any more, which makes me wonder if it has a known issue. 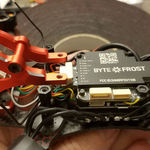 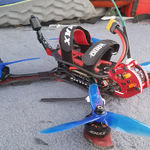 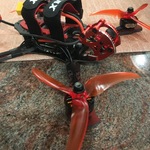 After the second crash, I basically used the two broken quads to cobble together one working quad. I also added an XM+ from another quad that I know worked well and had recent firmware. All of a sudden, I was able to get RSSI values, telemetry warnings, etc. Havent had an issue since, and it does seem to fly really well. It's also a very sexy quad, seems well built, and is very easy to work on.

I am fairly certain that these are shipping with either faulty XM+ receivers, or at a minimum, Receivers with old firmware (old firmware XM+ wont show RSSI). This is mindblowing as the the quad is shipping with Betaflight 4.0, which hasnt been out very long. I would look for a PNP version, or just order an extra receiver and swap it out. It's a cheap part, but a pretty darn important one.