The AKK FX3 Ultimate is essentially the mini version of the AKK FX2. With a 20x20 profile, it can easily fit into any of your 20x20 builds while having a high max output power and Smart Audio capability.

One button frequency and power setup

Note: Smart Audio is not compatible with KISS flight controllers. 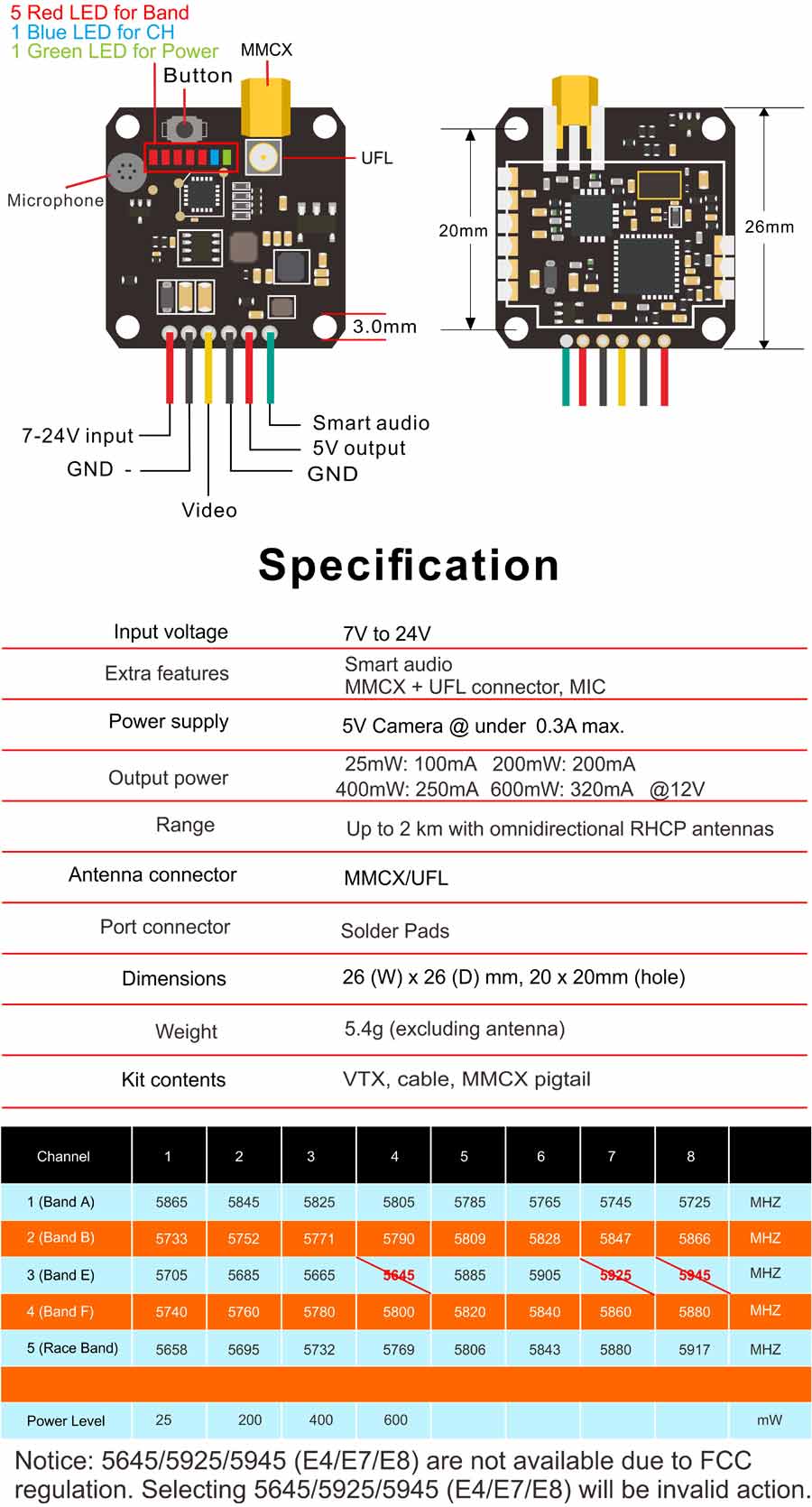 The use and operation of this type of product in the USA and many other countries may require a license and some countries may forbid its use entirely. In the USA, you will need a "HAM" amateur radio license. Learn more about HAM licenses, and find a HAM license exam session in your area. It is your responsibility to ensure that the use of this product meets the requirements imposed by your government's rules and regulations for RF devices. Do not purchase this product if you are unsure of the government requirements or are not able to comply with them. RDQ cannot be held responsible for your actions if you purchase and/or use this product in violation of your government's regulations. By agreeing to our terms and conditions during the check-out process, you also agree to have read and to understand this notice.

The Race Ranger is another 1 watt option from AKK that takes cooling and shielding seriously. The electronics are protected by an RF shield on the ...

Another solid, affordable Video Transmitter addition to the AKK product line. This one is designed with racers in mind.  Be sure to check out the w...

Featuring a whoop camera with Smart Audio! Take your Whoop tech to the next level. Super light weight: 4.3g, all in one vtx + camera + antenna On...

The AKK Nano3 Video Transmitter is a great option for those small, lightweight, tight builds. Making the Eachine VTX03 obsolete, and the TBS Nano s...

16x16mm mounting size. For the U.FL lovers, we have the X5 which packs a lot of power and capability into such a small package. This VTX is Smart A...

This interesting little camera attaches to the Oscar's Backpack VTX, and even has configurable picture settings via an OSD joystick! It can run on ...

AKK has taken the Infinite DVR and scalde it down a size! A 20x20, 1000mW, DVR equipped video transmitter!Check out all our Video Transmitters, and...

View full details
Powered by
3.9 3.9 star rating 35 Reviews
Write A Review
Thank you for posting a review!
We value your input. Share your review so everyone else can enjoy it too.
share
share
share
Thank you for posting a review!
Your review was sent successfully and is now waiting for our staff to publish it.
Clear All
Filter Reviews
Clear All
Size Performance Range Issues Video Picture
Works Price Vtx Set
Size Performance Range ...
Issues Video Picture
More Filters
FILTERS Clear All
Rating
Reviews
Show 35 Reviews
Rating
Images & Videos
35 Reviews
Updating Results
Verified Reviewer
What is a Verified Reviewer
A Verified Reviewer is a shopper who has confirmed an email address, or connected a social network with Yotpo, providing an added level of transparency and trust.
0 star rating
03/31/20
On
share ' Share Review by Anonymous User facebook facebook Share Review by Anonymous User twitter twitter Share Review by Anonymous User LinkedIn linkedin Share Review by Anonymous User
Was this review helpful? 0 0
03/31/20
S
Scott C.
Verified Buyer
What is a Verified Buyer
A Verified Buyer is a user who has purchased the reviewed product through our store.
3 star rating
03/31/20
Raceday Quads really doesn't stand behind what it sells
The VTX does not have smartaudio as stated. It does work with the buttons but that's why I only gave it three stars. I sent RDQ a request for help. Here is the sole response I received:

Thank you for your email! I'm sorry to hear that you are havign this issue with your new vtx. Have you already unlocked this vtx?

After reflashing with what I found was a special branch from Betaflight specifically for AKK/RaceDayQuads and for my Zeus35 flight controller, the settings still will not save. I read the Betaflight instructions ad nauseum and spent hours scouring the 'net for a solution. I also replaced the VTX with the same model (AKK FX3) that I also purchased from you and it operates exactly the same way. The unit will display in the OSD, but changing the settings through the flight controller has no effect and will not save in the VTX.

After all of the research (12 hours) and attempts I've made to get smart audio to work with these units, the only suggestion you made was to unlock the VTX. There are no instructions to do that and you offered none. You also did not suggest to flash with the AKK/RDQ branch from Betaflight, which I would think is needed considering these are AKK VTXs.