Check out the rest of our selection of VTX's! Note: 37 channels are all above 5650 and below 5925MHz, which are legal to use in the USA with an amateur radio license.
This equipment is being sold under FCC’s amateur radio rules. Operators must require amateur radio license to operator legally in  the US. Use of amateur equipment without a license or use of  equipment on restricted frequencies could subject the operator to  significant fines by the FCC.By purchasing this equipment, the user is agreeing that they understand these responsibilities and will operate  the equipment legally. More information related to ARL, please go to http://www.arrl.org/getting-licensed.

The use and operation of this type of product in the USA and many other countries may require a license and some countries may forbid its use entirely. In the USA, you will need a "HAM" amateur radio license. Learn more about HAM licenses, and find a HAM license exam session in your area. It is your responsibility to ensure that the use of this product meets the requirements imposed by your government's rules and regulations for RF devices. Do not purchase this product if you are unsure of the government requirements or are not able to comply with them. RDQ cannot be held responsible for your actions if you purchase and/or use this product in violation of your government's regulations. By agreeing to our terms and conditions during the check-out process, you also agree to have read and to understand this notice.

The Race Ranger is another 1 watt option from AKK that takes cooling and shielding seriously. The electronics are protected by an RF shield on the ...

The hunt for the perfect stack is ever-changing always meticulous. Matek is trying to give options for that hunt and has brought a new combo to the...

The FXT ARES 1 Watt 5.8GHz VTX is another great option for those looking to push their 5.8GHz gear to the limit, whether flying long range or just ...

The original Atlatl was an excellent VTX for many users, it performed well, however some design choices led to issues for some such as the antenn...

View full details
Powered by
3.4 3.4 star rating 8 Reviews
Write A Review
Thank you for posting a review!
We value your input. Share your review so everyone else can enjoy it too.
share
share
share
Thank you for posting a review!
Your review was sent successfully and is now waiting for our staff to publish it.
Clear All
Filter Reviews
Clear All
Quality Issues Video Amount Break Vtx
Dvr
Quality Issues Video ...
Amount Break Vtx
More Filters
FILTERS Clear All
Rating
Reviews
Show 8 Reviews
Rating
Images & Videos
8 Reviews
Updating Results
Verified Reviewer
What is a Verified Reviewer
A Verified Reviewer is a shopper who has confirmed an email address, or connected a social network with Yotpo, providing an added level of transparency and trust.
0 star rating
02/19/20
On
share ' Share Review by Anonymous User facebook facebook Share Review by Anonymous User twitter twitter Share Review by Anonymous User LinkedIn linkedin Share Review by Anonymous User
Was this review helpful? 0 0
02/19/20
S
Steven G.
Verified Buyer
What is a Verified Buyer
A Verified Buyer is a user who has purchased the reviewed product through our store.
4 star rating
09/17/19
I love the DVR. Video
I love the DVR. Video quality on DVR is great
Like:
Rdq is got to be the best fpv store in the business. I dont shop anywhere else 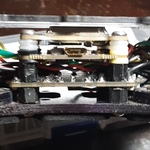 Mind you, the video is okay and clean with no breakup regardless if your goggles shows breaks.

The vtx should have really have a setting to auto record and save in case of unplugging power. Lack of foresight there.

Took off 1 star for the guessing game you have to play to figure out what your power level is if you're not using smart audio..

There's literally one red led for power setting and it's either on or off.
The thing has 4 power level settings and the led stays lit for the lowest power level of 25mw and off for all the others....like....seriously?

Otherwise I've got no issues recommending this vtx.


I've been using and eachine TX805 for a few weeks which served me very well or so I thought until I tried this one from AKK.
I've had AKK before but never had anything to compare it against.

My eachine was always run at max power 800mw and I still got a lot of break up around trees etc. I felt that was all well and dandy and just par for the course, until I installed this one and flew my regular course.

Right when I was nearing my first turn round a small shrub, I expected the usual tiny amount of break up but then I went full turn round the thing and got nada.

I immediately noticed that through most of the course I was getting very clear signal especially in the areas where I normally got breaks...

Note, I am running this one at full power 1000mw, however, that is only part of the story as I've recently learned that not all of these vtx's are actually outputting in the range they claim on the packaging...

Running this vtx convinced me that there was some truth to this story and I can honestly say that from now going fwd I won't be cheaping out on any eachine vtx anymore.

I'll buy AKK or something better.

This vtx has the added benefit of having on-board dvr. Basically even if you have breakup in your goggles you will have clear video on your vtx's dvr feed.

This is great if you like saving your video, however, the quality of the video is 640*480.

Though I can't complain, at least its cleanright. I think its high time that manufacturers up'ed this value to a minimum of 720p for dvr's its been long enough, its about time we started getting better video from our fpv feeds... companies need to stop nickle-n-dime-ing their customers man this sucks.
People would like better quality video and shouldn't have to shell out hundreds for higher footage when the capability is there for something slightly better than 480p.

The video is as okay, but just okay so minus 1 star because of this and minus an other star for the fact that there is no clear indication on the vtx as to what power output you are at.

There are a series of blue led's for band selection but only one red led for power?
who's bright idea was that? The thing stays lit for 25mw and then flickers each time you select a higher power level but stays off regardless of which one above 25mw you have selected...

They could have at least have the darn thing blink a few times to tell you which power level you're at..

Two times for 200mw,
3 times for 600mw etc.
That's just lazy on the designers part in my opinion.

You do have smart audio which is a must when using this vtx.
It works with vtx tables version 2.0 so make sure you use that otherwise you're going to be guessing as to what value you're set for power levels.

Apart from these two issues I have no trouble recommending this vtx I've only flown it 4 times and i'm pleased with it so far.