The RushFPV Stack features their CORE FC and MATRIX 30A ESC. It's a highly integrated 20x20 stack available with or without a Tank Mini VTX!

Check out all our 20x20 stacks & combos as well as our Rush FPV selection! Manufacturer Warranty Policy: Note that RushFPV has stated to us that they will not warranty items more than 30 days after purchase. However, RDQ will still warranty items which are dead on arrival or do not last a reasonable amount of time under reasonable flight conditions

A must have for all Flight Controllers! Made to help reduce the amount of noise and vibrations making it to the gyro on your FC. This is a simple w...

This plate is made to go over your mini (20x20mm) flight controller, allowing you to easily mount components on top. It also simultaneously acts as...

The SucceX-D Mini F7 Stack is designed to work seamlessly with DJI’s new HD FPV system. To make things as simple as possible, we have included a c...

RUSHFPV brings their signature quality and style to the 20x20 form factor. Nothing but size was reduced from the 30x30 Tank Ultimate! This little b...

The new Mamba mini stack featuring Mk3 FC and the new F series 4in1 ESC. Mamba stacks are still one of the best values on the market! Check out all...

Hobbywing brings the renowned quality and performance of their XRotor 60A 4in1 to the 20x20 form factor! Check out all our 20x20 4in1 ESCs and our ...

One of the most anticipated 20x20 6S ESC's from the creators of the popular Aikon AK32 30x30 4in1 ESC! As racers we are all striving shaving grams ...

View full details
Powered by
4.3 4.3 star rating 12 Reviews
Write A Review
Thank you for posting a review!
We value your input. Share your review so everyone else can enjoy it too.
share
share
share
Thank you for posting a review!
Your review was sent successfully and is now waiting for our staff to publish it.
Clear All
Filter Reviews
Clear All
Buy Stack
Buy Stack
More Filters
FILTERS Clear All
Rating
Reviews
Show 12 Reviews
Rating
Images & Videos
12 Reviews
Updating Results
Verified Reviewer
What is a Verified Reviewer
A Verified Reviewer is a shopper who has confirmed an email address, or connected a social network with Yotpo, providing an added level of transparency and trust.
0 star rating
07/19/20
On
share ' Share Review by Anonymous User facebook facebook Share Review by Anonymous User twitter twitter Share Review by Anonymous User LinkedIn linkedin Share Review by Anonymous User
Was this review helpful? 0 0
07/19/20
W
Will
Verified Buyer
What is a Verified Buyer
A Verified Buyer is a user who has purchased the reviewed product through our store.
5 star rating
04/11/20
Love this little stack
Will buy again for a 3” quad setup I want to build!! This one went on my cycloneFPV ARC F175 4” race frame !!! Waiting on my new camera (Caddx Ratel) would have bought it if you had it in stock 🤔
Like:
Everything shipped on time but I do wish you could keep more things I’m needing in stock 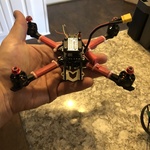 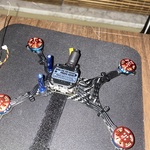 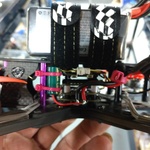 In reality, UART 1 and 4 and SDA/SCL aren't accessible at all; they are part of a tiny multipin-connector that would require tiny micro-needle pins to access, and are completely covered up when you mate the FC board to the ESC board. I could micro-solder the the surface-mount traces, but I really don't think it would be reliable over time. Plus I would need to source power from somewhere, likely the LED header.

Rush seems to make it so much easier by adding locking micro-connectors with cables for camera, RX, and LED, but then reality slams in when you realize that you can only connect TX2 or RX2 to your receiver of choice. You have to bridge a pad underneath the FC and on the *opposite side* to send one or the other through the 3-pin-only cable. I mean, come on Rush, we have Crossfire and I need both. Other manufacturers would too; I can't believe Rush put out an FC that is so behind the times as far as connections are concerned. I was able to jury-rig it pretty easily and have Crossfire running on it, but it the jumper I had to add from TX2 to RX (pin3) of the Crossfire Nano doesn't have much of a pad to hold on to. I basically soldered it directly to the TX side of the bridge pads underneath the board, which were never meant to support a wire connection.

Although the stack seems well engineered and does in fact bond together into a capable package, it's only really appropriate as a background basher or racer as it has no navigation capability. That's a shameful waste of the 800mw VTX though, as it only really needs 200mw or so.

Lastly, once I figured out these issues I went in search for the Rush FPV website, but there doesn't seem to be any; not the mark of a trustworthy company. They seem to have a Facebook page, but the URL to their website there comes up unavailable. So no documentation other than their nice "wiring diagram" posted in every product listing.